June 23:  3 thousand miles is at least 1,000 too many. I retract my comments that I made about Chinese food, hotels and rapture. That was Beijing.  People who think they know China after a visit to Beijing are like those who think they know the US after a visit to NY City. As we have driven west, the food and hotels, with very few exceptions have become worse and worse.  China has a long way to go to bring this entire county up to any Western standard.  From reading the IHT, I know they hope the high-speed train will connect East and West (of China), but not yet.  Health and sanitation does not seem to be on the agenda yet, just energy, roads and infrastructure that impresses.

Wednesday, June 22, was a short day so we ate lunch at the hotel in Kuytun after we arrived. It is hard to know how old this food was, but the same buffet was available again at dinner and the next morning.  Who knows if this was even the first day!  I became nauseated after lunch. To make matters worse, the toilet in the first room we were offered wasn’t working.

They switched us to a second room in which the toilet was not working. Fortunately they got it working before I started vomiting! As always, the hotel claimed AC but as usual the room was hot and stuffy. Chinese AC has become one of the jokes on this trip. The bed was a board with springs randomly poking up which did not make for a restful night. I ate no dinner and had bread and bottled water for breakfast. The jam had mold on the top and there was no butter, perhaps just as well. The good news, I’m losing weight! Roy gave me his magic medicine which seemed to help and I was not nauseated Thursday morning as we started to Yining, the closest town to the border.

The other good news is Stewball is running well and the G30 is smooth and flat. The Tien Shan Mountains are on our left and flat plains as far as we can see on the right. We only had one hour of unpaved, pot-holed roads, just at the time I was going to catch a nap in the backseat. That didn’t happen but the scenery was spectacular.  We had Yurts, horses, camels and a beautiful lake that reminds me of Lake Baikal in Siberia, clear, cold and blue. At one point a horseback rider (Mongolian nomad?) rode along side of us, laughing and teasing us as he rode faster than we could drive! Too bad this road and bridge wasn’t finished and ready for us! Maybe for next years travelers. 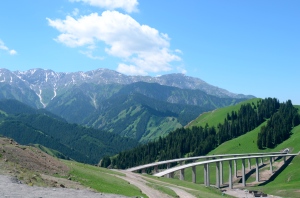 Tomorrow is the border crossing, really two borders, first China, then 2km of neutral zone and then the Kazakhstan border. Of course each border requires different documentation. Cross your fingers that our paper work is in order, or we will get to experience Doug’s promised “opportunities for adventure”.  We have learned only the driver of the car can cross with the car, Jan along with the other navigators will cross in a bus (make that bribe a driver with an already full bus to let them stand in the isle with our extra luggage for the 2 km trip).  No one is allowed to walk this distance and NO photographs.  Our support vehicles cannot cross (they are Chinese) and new vehicles and drivers will meet us on the Kazakhstan side.

All I can say, is, if you plan to drive China, be prepared for friendly people, a travel adventure and the lack of creature comfort as we know it. I am REALLY ready for a different country and I am not alone.

Authors and adventurers, participated in the World Race 2011, an automobile rally from New York to Paris, crossing three continents and 14,000 land miles. Following much the same route as the setting for our debut novel, The Long Road to Paris. This blog describes our own adventures and challenges. And now you can follow our Bahamas sailing adventure that provides the setting for our second novel, Night Watch. Our rally, the African Safari Challenge, crossed five countries in South Africa in May 2014 and in 2015 we participated in the second Trans-American rally this time from Nova Scotia to San Francisco. Spring of 2016 we travelled 28 days around Australia with friends from previous rallies and in the fall participated in our most exhausting rally through Argentina, Chili and Peru- the Rally of the Incas. We were awarded the Against All Odds award. We're still not sure if this was for us or our car. Stewball never broke down and we hardly did. We will soon take on Iceland as a self-drive tour and in the fall of 2017 we will participate in the Odyssey Italia and then back to Africa for a do-over (almost) of the Africa Safari Challenge.
View all posts by ejhowle23 →
This entry was posted in Uncategorized. Bookmark the permalink.

4 Responses to Enough of China!