Feb. 6: Could you recognize an authentic  ’67 Beetle? So, prove it. Is Stewball really what he appears to be? Something hidden inside perhaps. (I’ve read something about an alternative energy engine, but I’m sure that was a novel!) Just what are we hiding under that car cover????

Well, that is the question we must answer now that we have signed on to rally to Alaska with the august Peking to Paris Rally Association.  I have just submitted four pages of paperwork to the Federation Internationale des Vehicules Anciens to prove that Stewball is in fact Stewball; a ’67 Type 1 VW Beetle.

Seriously I can understand that for the 1924 Bentley, the 1929 Mercedes S or the 1965 Rolls Royce Silver Cloud, but who would want to forge a 1967 Beetle much abused from a trip around the world, well other than someone who drove China with a forged license! Mabe they think it is actually one of the 100 prototypes built before WWII, perhaps even the one that Hitler gave to Eva Braun while he drove a Mercedes-Benz 770.

Really, that’s what the cheapskate did, and stupid Eva was still willing to die with  him in that bunker.

When we get to the NY start of the rally, a  scrutinizer (don’t you love that word!) will examine the car to see if I am telling the truth, that Stewball is authentic. I’ll even have a card; Proof of Authenticity to carry with me, if anyone should ask along the rally route. Too bad I didn’t have it in China, in the Gobi desert, when the hotel owner asked to buy it for a museum. Do you suppose Stewball’s as valuable as a Rembrandt? I’m sure if you are a card-carrying authentic automobile, the price goes up, right? 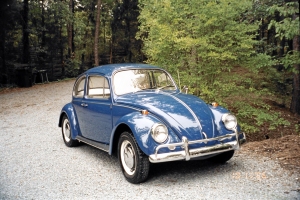 NOT. He is just our worn, loved old Beetle, going into the shop tomorrow for a valve job and new tires. But I’d better be certain that they use genuine antique VW valve grinding compound.

Readying for the Rally to Alaska.

Authors and adventurers, participated in the World Race 2011, an automobile rally from New York to Paris, crossing three continents and 14,000 land miles. Following much the same route as the setting for our debut novel, The Long Road to Paris. This blog describes our own adventures and challenges. And now you can follow our Bahamas sailing adventure that provides the setting for our second novel, Night Watch. Our rally, the African Safari Challenge, crossed five countries in South Africa in May 2014 and in 2015 we participated in the second Trans-American rally this time from Nova Scotia to San Francisco. Spring of 2016 we travelled 28 days around Australia with friends from previous rallies and in the fall participated in our most exhausting rally through Argentina, Chili and Peru- the Rally of the Incas. We were awarded the Against All Odds award. We're still not sure if this was for us or our car. Stewball never broke down and we hardly did. We will soon take on Iceland as a self-drive tour and in the fall of 2017 we will participate in the Odyssey Italia and then back to Africa for a do-over (almost) of the Africa Safari Challenge.
View all posts by ejhowle23 →
This entry was posted in Uncategorized and tagged authenticating an antique auto, Eva Braun, Gobi Desert, Hitler's Mercedes, Peking to Paris, Rolls Royce Silver Cloud, Trans-Am Rally. Alaska, VW Type 1Beetle. Bookmark the permalink.