April  6, 2014. If you read Ed’s blog on car preparation, you  need to know there is a lot more to getting ready for an endurance rally than just prepping the car. Here is the list of  equally important items (not in any particular order) I manage in preparation.

1. Cleaning and accessorizing: Stewball is really beginning to look like a road hog, but this is not a time for dressing up-the car or us. After the World Race in 2011 and then the Trans-American Challenge in 2012, I really wanted to have the car repainted. But after we received the information on the Safari Challenge, and the road conditions in many parts of Africa, I decided the paint is just going to get more nicks on the miles of gravel roads. So, I have to be content with a good wash job.

…and my ceramic flower vase on the dashboard. As I have on past rallies, I will have a f

resh flower to start each day. My flowers have come from VW enthusiasts we met along the way, snitched from hotel gardens or breakfast tables, or picked from wildflowers we see along the route. Snitching is one activity Ed doesn’t approve of, but I’m not quite as honest as he is and I make sure he doesn’t see me so he cannot be an accessory to a crime.

After washing, it is my job to put the rally numbers on the car. This time we will be Car 14, I don’t know how that is decided, but Stewball has had many different numbers and doesn’t seem to have an identity problem.

2. Navigator’s materials: This may be my most significant contribution. On a rally we are called co-drivers. But honestly, Ed does more of the driving and I do more of the navigating so I am in charge of getting the navigating materials together. Now if you don’t know what it is to navigate on a rally here is a brief description. While rallies differ,  on this one we will receive a spiral bound Route Book with the entire route illustrated in tulip diagrams. (On some rallies we only receive the day’s route each morning twenty minutes before the start time, adding to the tension. ) I’ve been told that this system was first used in a rally in the Netherlands, hence tulip diagram. A tulip is a stick figure, more or less. The ball end is where you are and the arrow is the direction you will go at this point in the rally. What you see in the example below is a left turn at a 4-way intersection (with a traffic light) that has a curve to by-pass the light. In case you forget what the symbols mean, there are pages in the front of your rally book which illustrate and describe them all. Most are obvious.

Like this photo shows, each instruction is set up in 5 columns. the total distance, the interval distance-from one maneuver to the next- the tulip, critical symbols to look for, such as a stop sign, traffic light, or sometimes even a street name. We have pages and pages of these. The navigator tells the drive what to do and when to do it. A great combination for a husband/wife team, if she navigates. It takes constant attention and since the navigator has to also watch the road and the rally computer, it is important to have some way to mark off each direction as it is completed. So, LOTS of colored markers are required. I’ve been known to wear out a marker in a day or two. This is just one page! 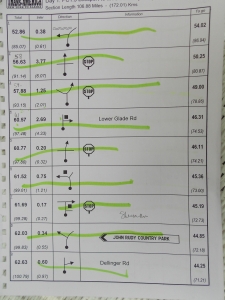 So, my preparations include assembling a clipboard, paper for notes and calculations (some times we have to calculate average speed based on distance and time.) pencils and pens and the required stop-watch  which I set at the beginning of the day or at a restart after a break or lunch. A second stop watch is used to time intervals on a timed trial during which you are given an average speed to drive. Then of course there are snacks and water to collect since stops are few and far between.

3. Visas : This time we needed visas in advance only for Zimbabwe. Our passports are really getting filled up since we already have visas for China, Russia and Kazakhstan.  Fortunately Zimbabwe has an embassy in Washington D.C. and were very prompt on returning our passports. Ed hates to be without one. It is the only time he becomes claustrophobic.

4. Medical prepartion: Lots of vaccinations were “suggested” . We succumbed to those for hepatitis A, tetanus and typhoid. Perhaps the most important thing is medicine to prevent malaria, since all these countires are considered high-risk destinations. We added appropriate repelent with DEET to ward off mosquitoes and other biting things. Apparently there is no prevention for elephant , rhino or lion attacks-just common sense.  Our personal first aid kit-not the standard issue-

will contain all the OTC meds for yucky stuff that can come with change in diet and exposure to other travelers’ woes.  Nuff said.

We have limited space in the car and we must be able to carry everything with us, so clothes that can be washed and dried quickly are essential. Here we are still in rally clothes when the World Race ended in Paris, 2011.

I’ve learned the bathtub shuffle. It goes like this. Put the stopper in the tub before you shower. Add clothes, and detergent and while naked-you’ll have to use your imagination here- shimmy in a figure 8 while visualizing a washing machine agitator. Wring out in a towel-after you dry off. Hang on the shower rod. Dry by morning.

I think this just about covers it. More from the road, 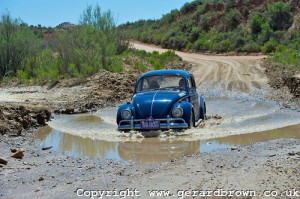 Authors and adventurers, participated in the World Race 2011, an automobile rally from New York to Paris, crossing three continents and 14,000 land miles. Following much the same route as the setting for our debut novel, The Long Road to Paris. This blog describes our own adventures and challenges. And now you can follow our Bahamas sailing adventure that provides the setting for our second novel, Night Watch. Our rally, the African Safari Challenge, crossed five countries in South Africa in May 2014 and in 2015 we participated in the second Trans-American rally this time from Nova Scotia to San Francisco. Spring of 2016 we travelled 28 days around Australia with friends from previous rallies and in the fall participated in our most exhausting rally through Argentina, Chili and Peru- the Rally of the Incas. We were awarded the Against All Odds award. We're still not sure if this was for us or our car. Stewball never broke down and we hardly did. We will soon take on Iceland as a self-drive tour and in the fall of 2017 we will participate in the Odyssey Italia and then back to Africa for a do-over (almost) of the Africa Safari Challenge.
View all posts by ejhowle23 →
This entry was posted in Antique car rally, international travel and tagged Classic Safari Challenge, Endurorally association, rally car preparation, rally navigation, rally route book, travel clothing, travel health, travel medicine, tulip diagrams, visas, Zimbabwe. Bookmark the permalink.

5 Responses to Preparing to Rally-Jan’s Perspective