July 2: Still in Northern Iceland. Our travel guide suggested a stop at Gooafoss, the waterfall of the Gods. We hadn’t really intended to stop. We’ve seen a lot of waterfalls along the way and I have come to realize I like the small, narrow ones that cascade down rocky cliffs to the big ones. 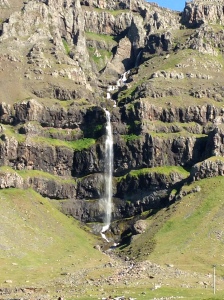 However, Gooafoss can be easily seen from Highway 1 so it’s hard to miss. It’s horseshoe shape reminded me of Niagara Falls, just not so big. But the thing about Iceland as you can get up close to all these natural wonders. Guess they think if you chose to do so, you also assume your own risk. What a novel idea! 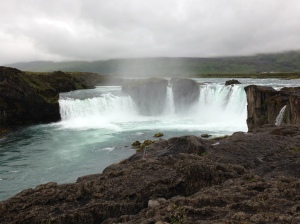 Our route took us off I, through the towns of Siglufjorour with its Herring Era Museum-we didn’t stop and Akureyri and eventually on to 76 where we encountered three tunnels. The longest was 8 km but the most tense was one that was one lane with pull offs for the car heading north-that was us.

Much of this country is farm land set among impressive mountain ranges, meaning we drove mountain roads with no guard rails.  I don’t know what is raised other than sheep, an abundance of Icelandic horses and even cows. Fields do yield hay and maybe wheat, but the growing season is so short we’ve not seen signs of anything else. By the time we reached Hofsos we were very hungry.

Hofsos is a picturesque town on the water. Fishing seems to be the norm along here but there is also a thermal pool with a great view over the Arctic ocean. We didn’t go in, but on this Sunday, the pool definitely had more cars than any church. Religion doesn’t seem to have a big effect on people here.

Our final stop today was unexpected. We came across a vintage auto museum and Ed had a great time exploring. This upscale Opel was imported in Iceland by the German embassy and used by a German spy in WWII. After the war, it was discovered hidden in a stack of hay. They even had three Type 1 VW Beetles and I left our car with Stewball’s photo with their guest book.

We  are now at Hofsstadir Guesthouse  which has the reputation of an excellent restaurant. We look forward to that.

Authors and adventurers, participated in the World Race 2011, an automobile rally from New York to Paris, crossing three continents and 14,000 land miles. Following much the same route as the setting for our debut novel, The Long Road to Paris. This blog describes our own adventures and challenges. And now you can follow our Bahamas sailing adventure that provides the setting for our second novel, Night Watch. Our rally, the African Safari Challenge, crossed five countries in South Africa in May 2014 and in 2015 we participated in the second Trans-American rally this time from Nova Scotia to San Francisco. Spring of 2016 we travelled 28 days around Australia with friends from previous rallies and in the fall participated in our most exhausting rally through Argentina, Chili and Peru- the Rally of the Incas. We were awarded the Against All Odds award. We're still not sure if this was for us or our car. Stewball never broke down and we hardly did. We will soon take on Iceland as a self-drive tour and in the fall of 2017 we will participate in the Odyssey Italia and then back to Africa for a do-over (almost) of the Africa Safari Challenge.
View all posts by ejhowle23 →
This entry was posted in Iceland, international travel and tagged Gooafiss waterfall, Hofsos, Hoifsstadir Guesthouse, Siglufjorour. Bookmark the permalink.

4 Responses to Natural and Cultural Wonders