June 30, July 1: We are in picturesque Husavik, the “Whale Watching capital of Europe”.

Everyday we learn more about Iceland. The population of Iceland goes like this. First are the sheep, second are horses and a distant third are people, tourists outnumbering Icelanders by a huge margin. I have nothing  to back this up but we have dodged free-range sheep and no people.

We drove through the densely forested area of Iceland. It took 15 minutes. That’s an exaggeration, 10 tops. So here is an Icelandic joke.

What do you do if you are lost in an Iceland forest?

If you have visited Iceland, you’ll get this, if you haven’t you need to know Iceland with all its vastness has almost no trees. No one has been able to give me a definite answer why. Perhaps the regular volcanic eruptions and ash, maybe the glaciers, maybe the long, dark winters, maybe Vikings or Trolls.

Next, we were under the impression (I’m sure I read this somewhere) that Highway 1 is asphalt all the way around Iceland. Well, it’s not. I turned the driving over to Ed and we had several hours of gravel-make that muddy- road. We also detoured onto 87 to get to Husavik on a shorter route which turned out to be a slower route because of the road conditions. But we learned something else. All the gas stations we have encountered have free self-serve car wash. It’s needed now in summer and I am sure this is worse in the winter. We have already washed the mud off our car twice! Not so worried about the car, but every time we get in or out, we get mud on ourselves.

So Husavik. It was primarily a fishing town, but now, the main economic support seems to be a perfect tourist destination for whale watching. It was windy, cold,  and misty but I decided to go. Ed, being the smarter, stayed in the hotel. This was the restored wooden boat I went on. 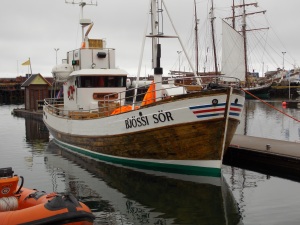 I was  hoping to see Puffins since our trip went to Puffin Island. The Puffin part was a disappointment. We saw hundreds of Puffins in the air and in the distance on the island but we were never close enough to get photos. I may end this trip with no Puffin photos. Whales on the other hand performed beautifully, my photos were not good because I was so excited to see them, that I was too late with my camera. You’ll have to trust me. I saw a lot of whale and got wet and cold from waves breaking over the bow of the boat. Define fun.

The day ended with dinner at the charming, water front Gamli Baukur restaurant made of driftwood. I can only say the atmosphere was better than the food. 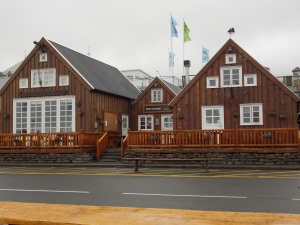 Tomorrow across the top and on to Skagafjorour.

Authors and adventurers, participated in the World Race 2011, an automobile rally from New York to Paris, crossing three continents and 14,000 land miles. Following much the same route as the setting for our debut novel, The Long Road to Paris. This blog describes our own adventures and challenges. And now you can follow our Bahamas sailing adventure that provides the setting for our second novel, Night Watch. Our rally, the African Safari Challenge, crossed five countries in South Africa in May 2014 and in 2015 we participated in the second Trans-American rally this time from Nova Scotia to San Francisco. Spring of 2016 we travelled 28 days around Australia with friends from previous rallies and in the fall participated in our most exhausting rally through Argentina, Chili and Peru- the Rally of the Incas. We were awarded the Against All Odds award. We're still not sure if this was for us or our car. Stewball never broke down and we hardly did. We will soon take on Iceland as a self-drive tour and in the fall of 2017 we will participate in the Odyssey Italia and then back to Africa for a do-over (almost) of the Africa Safari Challenge.
View all posts by ejhowle23 →
This entry was posted in Iceland, international travel and tagged Husavik, whale watching. Bookmark the permalink.

1 Response to Fjords and Fishing Villages