And So It Starts Again

May 26: Charleston, SC. Stewball is in the secure parking lot at the Dewberry Hotel in Charleston after spending a week on Sullivan’s Island with other rally friends. We all debated just staying at the beach for three weeks then flying to the final destination in Seattle, Washington. But here we are. Today all the cars were scrutinized. Stewball passed with flying colors.

For a week now we enjoyed quiet mornings and great company which included friends from the Netherlands and England and our niece who lives nearby.

Friday we celebrated Mick’s 65th birthday at the beach house. That was special for everyone. 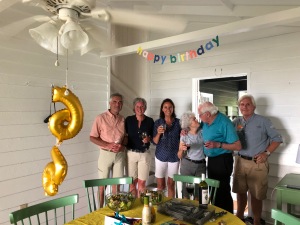 Tomorrow at 8:13 am, we start out. The first car out is at 8:00. Cars begin at one minute intervals and even though we are car 16, not every number is represented and we will be the 13th car to leave.

Our destination is Charlotte, North Carolina via back roads which take us out of Charleston to Summerville and onward. We don’t know exactly how the day will go, it looks easy on paper, but we’ve learned a long time ago, that is not reality.

I will post as we go as often as I can. Sometimes it’s the internet connection, other times it is fatigue but I will do my best.

See you down the road,

Authors and adventurers, participated in the World Race 2011, an automobile rally from New York to Paris, crossing three continents and 14,000 land miles. Following much the same route as the setting for our debut novel, The Long Road to Paris. This blog describes our own adventures and challenges. And now you can follow our Bahamas sailing adventure that provides the setting for our second novel, Night Watch. Our rally, the African Safari Challenge, crossed five countries in South Africa in May 2014 and in 2015 we participated in the second Trans-American rally this time from Nova Scotia to San Francisco. Spring of 2016 we travelled 28 days around Australia with friends from previous rallies and in the fall participated in our most exhausting rally through Argentina, Chili and Peru- the Rally of the Incas. We were awarded the Against All Odds award. We're still not sure if this was for us or our car. Stewball never broke down and we hardly did. We will soon take on Iceland as a self-drive tour and in the fall of 2017 we will participate in the Odyssey Italia and then back to Africa for a do-over (almost) of the Africa Safari Challenge.
View all posts by ejhowle23 →
This entry was posted in Antique car rally, international travel, Trans-American Challenge. Bookmark the permalink.